In the throes of newborn days after having my daughter, I was just so happy. One of my favorite things to do was to snuggle up on the couch and nurse her while watching The Office because I had only seen a few episodes here and there, so I took it upon myself to borrow the entire series of DVDs from my sister.

When I got to the wedding one, I was so "in touch" with the characters that that particular episode where Jim and Pam tie the knot just made me cry, almost uncontrollably.

True confession comes in here: while pregnant with Jameson, when I was almost full-term last summer, I was driving to work on a beautiful summer day. I heard "Forever" (the song that plays when Jim and Pam get married and it shows them on the boat together), I started crying in my car. Yep. Fucking Chris Brown. Cue the tears. WTF.

So yeah. There's my random story for you today! I'd be so embarrassed to share that with people in real life. But I love Jim and Pam so much.
Posted by Sarah at 9:17 AM No comments:

I marvel at their observations.

Elise has just turned two and sometimes, well, most of the time, she is a very typical two-year-old. Other times, I am so amazed at what she does. I was home on my 10:00 boobie break and the hubby told me that he was in the bathroom (on the toilet) when Elise walked in with a book in hand and her bowl of cereal. She handed him the book (he just bought it, the first Hunger Games book so this is why I marvel at the fact that she recognized it as his, as he had just started reading it last night) and plopped down on the floor with her cereal and started eating it. Whenever I think she isn't aware of certain things, it's moments like this that I am reminded just how observant she really is. She's taking notes and keeping score, oh yes. :)

Have a great weekend. Enjoy this historical weather (that is, if you live in the central part of the United States, particularly the Midwest, where we are enjoying our warmest March well, EVER. This is a 1 in 5000 chance that this would ever happen, according to one of the hubby's weather geek friends who did the statistics of it all. Kinda creepy.).
Posted by Sarah at 10:56 AM No comments:

I'm the 31 (almost 32) year old lady with 3 [empty] carseats in the backseat of the Focus, jamming on the way to work with the windows down and the bass booming.

LOL, backstory: I got my license at 23 so I guess I missed out on the "cruising" days that most teens get to do those first few years of driving. I mean, I did with friends, but as a passenger only.

Did you know I've got "rubberband banks in my pocket"? LOL.

I sit here in my office, Dr. Pepper nearby, some color on my arms, timecards finished, and I reflect back on what a beautiful weekend I had with my family. On Saturday, after I got all the major house chores out of the way, the hubby and I took all three kids to the park and enjoyed some beautiful weather. We then went to my mother's house to grill out, our first of the season! She has a new patio set out on her deck she wanted to show off. Mom, with her glass of wine, was enjoying the evening after a day's work, and we all watched a movie after supper. [Mr. Popper's Penguins, a cute family flick that is not too cheesy, somewhat enduring, and has some comedy to it.]

Sunday, we went over to the grandparents' house and the kids played in the yard while the adults marveled at the weather and basked in the sun, something we have never done as early in the year as March 18th! Later on in the evening, the hubby took the oldest in the bike trailer down to the co-op to get a few groceries. I took the younger two outside while I put away our lawn chairs and toys, looking up at the sky in time to see a fighter jet fly over (we're close to the airport). I am an airplane freak, if you didn't know it.

This week is still supposed to be nice. I'm taking a half-day on Wednesday, pending my boss's approval, and we're probably going to take a family bike ride (we have single and double bike trailers). We can have more of this weather and I will be okay! Yep, folks, I have a watch tan and am proud that I earned it in March and in Wisconsin to boot! My aunt and uncle leave today for Punta Cana. Haha, who needs to fly to enjoy the weather?!

Ah, and in case you're bored, you may check out my accent video. I am part of a close-knit group of girls who all had babies at the end of 2009 into early 2010 -- we've been friends since we were all pregnant and we became closer yet and I'm glad we all still talk daily -- anyway, we got to posting videos of our accents so I found a list of words for the "accent challenge".

Jameson turned 6 months on February 22nd. It's hard to believe in another week he'll already be 7 months! 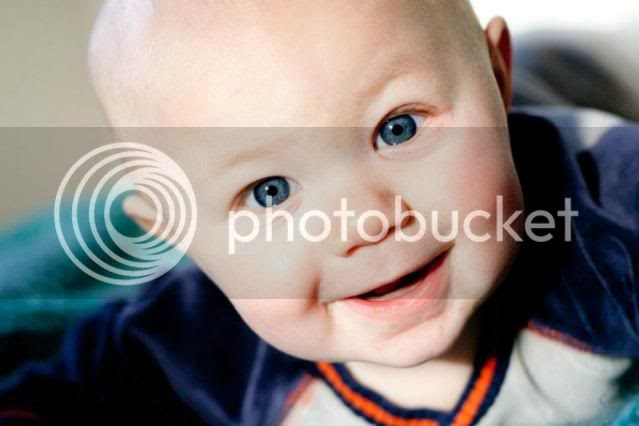 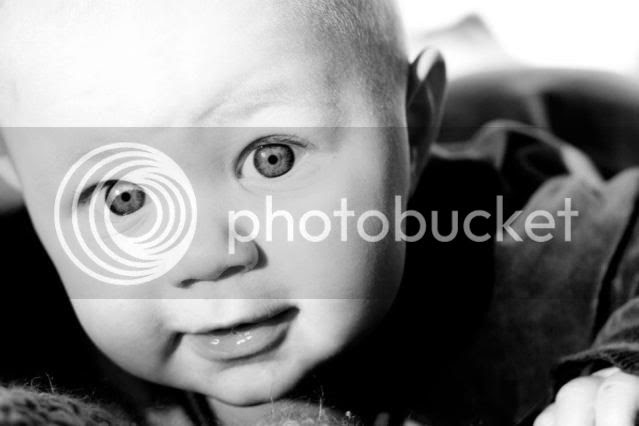 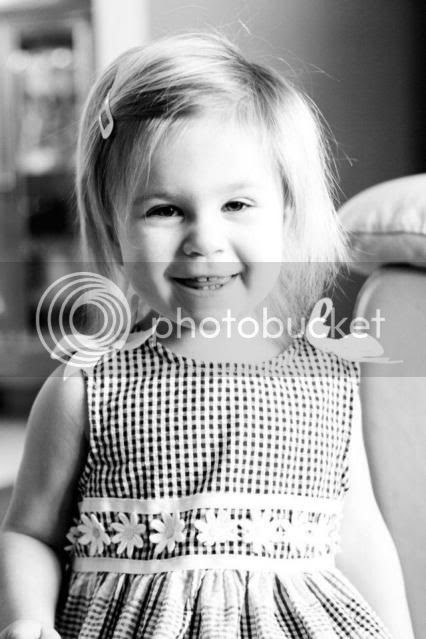 And . . . Andrew is still very adorable and sweet and cute but has been photo un-cooperative. I will try and get a pic of him to share soon. He has changed so much even since the Christmas pics I took. He's growing up crazily fast! I just freaked out about his height the other day because I had a moment where I realized suddenly that he's super tall!
Posted by Sarah at 7:30 AM 3 comments:

I've been "blessed" with a personality that is very outgoing. I smile a lot. I enjoy talking and will talk to just about anyone. I make friends easily. This really helps me in my career of choice (Human Resources) because interviewing people and orientating people comes very natural to me and I feel I am able to make people feel at ease. I can talk to people on the phone and help them out, and then if they stop in to ask about a position, they see that it's a great and friendly place to work. I really love my job.

The other part of my personality which I have decided is more of a curse than a blessing is the fact that I am sensitive. I feel like I'm crazy sometimes. I never know how to read sarcasm. I don't do well in situations where I have to assess if people are liking me or not liking me. I have this issue where I want to be liked by everyone but deep down I know that's not possible. Someone is not going to like me for whatever reason. Yet, I take it all personal. I am constantly questioning whether friends like me or if they really just like me to my face and talk about me behind my back. It drives me nuts. I wish I could just not care and move on but I have a tender heart so of course I worry about it. I don't approach anyone about it because I don't want to make an issue out of nothing, if there is no issue.

Ah! Why can't people just be open and not snarky? I'd rather have the truth.

Also, I think Facebook has really fucked up my self-worth. I feel like me and being me is not good enough for anyone but my family.
Posted by Sarah at 12:09 PM 2 comments: