On Friday, July 25th, Andrew turned 11 months old. It's hard to believe that in another month he will have his first birthday! I'm sorry I haven't been updating the blog. We were sick this weekend--well, Andrew and I were. He started running a fever on Friday and it really got up there (103.8 when he woke up Sunday morning). I had called the nurse advisor Saturday night and she said to keep an eye on it and if it was still there Sunday morning to bring him in. I gave him his Motrin, which brought it down by the time I got him in. The doctor wanted to collect a urine sample to rule out any infections which would require antibiotics. So he had a little bag taped on his ween; the nurse who applied it said normally babies scream bloody murder, but Andrew just smiled at her! She said she wanted to take him home because he was so cute. It took him over an hour, but he finally peed! He spent that hour crawling around the waiting room, checking out the fish tank, and crawling over to talk to random strangers. I am going to have to watch this one someday since he has no stranger anxiety. Anyway, the urine sample came back clean, which was very good news (I was worried about meningitis or something of that nature). It is a strange fever since he has no other symptoms. The doctor said it's a virus and we're just supposed to keep giving the Motrin and keep him cool. He's had a lukewarm bath every day. It's just hard to see him sick. He only wants me, and yesterday at my grandparents' house he wouldn't go to anyone and he cried every time I walked away (I had him in the high chair and if I was 2 feet away, those alligator tears started running). Normally my mother can hold him just fine. This morning, he still had the fever--he woke up at 3:00 am and was on the boob for over an hour. I just let him comfort nurse because if I pulled him off he would just start crying again. Hopefully this goes away soon! I have a feeling he's going to break into a rash after this is all said and done--sounds like he has classic roseola symptoms. Srengthening the immune systems is what's going on, I guess, if there is anything positive to come out of this. I mentioned that I was sick too (I had diarrhea and vomiting from Friday night all throughout Saturday).

And now, a cute picture of Andrew for your enjoyment! 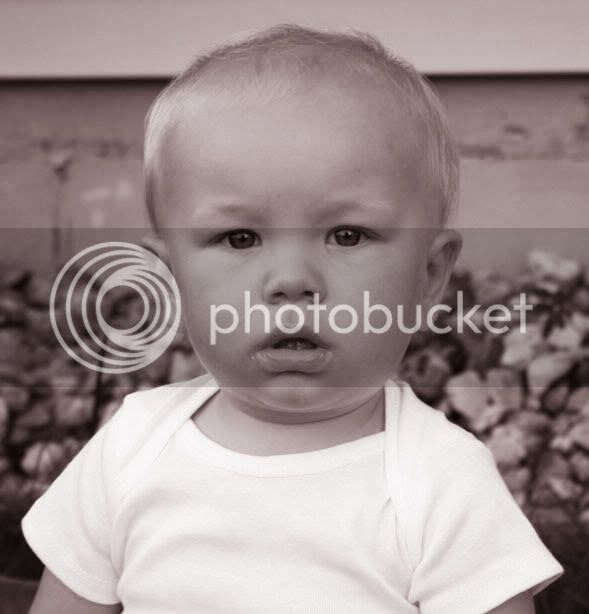 The dreaded word. Andrew turns one on August 25th. That's a little over a month away. My GOAL was to have him finished with his daily breastfeeding from me (because currently his schedule is: 7:30a, 12:00p, 4:15p, 8:00p, 3a) so I realize that it might be hard to cut some of the evening/night feedings down. I want him to be on breastmilk until he is one, and maybe a tad longer. He knows the sippy cup brings drink, but I really don't know if he's going to sit and down 4 ounces of Momma milk from it in one sitting. He usually just chews on the nubby part (and yes, I have the valve out because Andrew isn't interested in sucking out of the cup and I want him to learn that cup = pour not cup = suck).

Any other breastfeeding moms have advice for what worked for them? Oh, and I have a ton of milk in my deep freezer, so I have that to use up (I'd like to use up what I can, whatever is still good, and then switch to whole cow's milk).

All of this garble translated: my baby is addicted to the boob. Help!
Posted by Sarah at 1:53 PM 2 comments:

Fun in the kiddie pool!

We set up the kiddie pool on Saturday. It was gorgeous outside and the pool heated up in about three hours! I brought the bubbles with and Andrew was trying to JUMP in the air to catch them! It was hilarious. Here he is splashing around.... 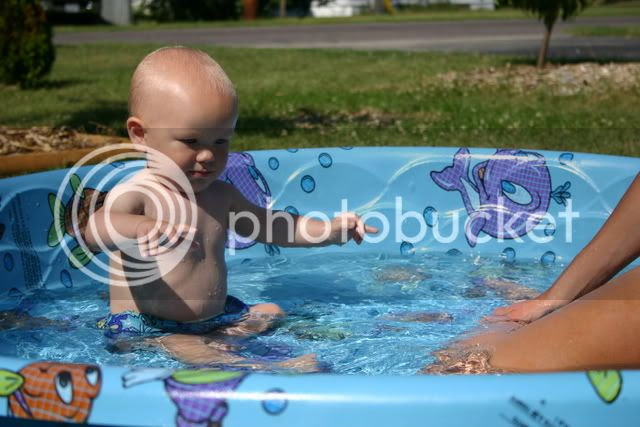 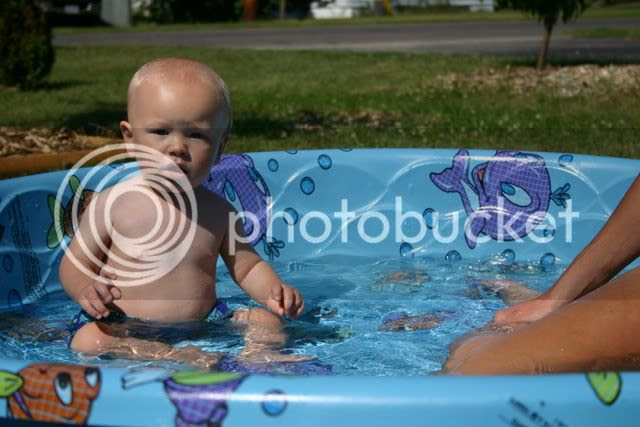 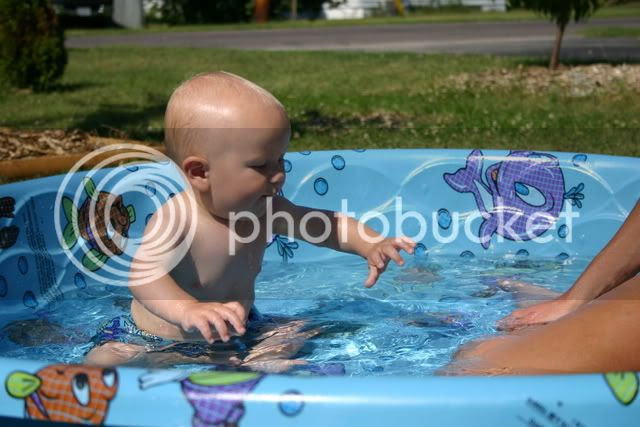 About 5 minutes into the swimming experience, he decides he wants to stand up on the side and attempt to jump out of the pool! Then he would turn around and plop back down on his butt. It was so funny! 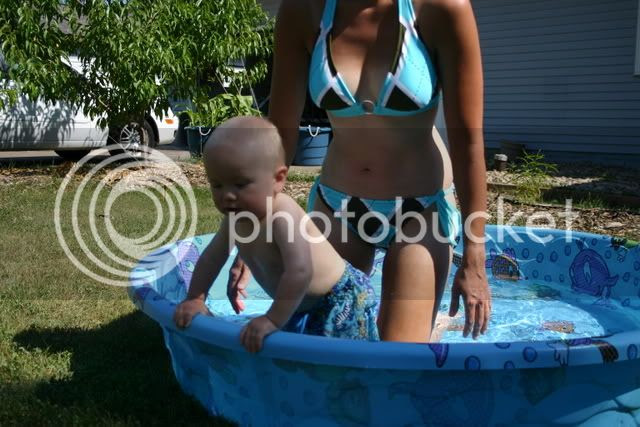 If Andrew is anything like Daddy and Mommy, he will soon be a fish! We both love to swim, and I have a feeling Andrew is going to love it too. On Sunday, we went swimming at my grandparents' house in the big pool and at first he was a little scared (cold, I think more than scared), he eventually loved it! I have a little baby boat I put him in and then I took him out and started making 'waves' with his legs so he was skimming the water. I was holding him up in the air and splashing his bottom down in the water and he loved it!
Posted by Sarah at 11:26 AM 1 comment:

One of my most favorite pics thus far

My family had a picnic in the park on Saturday. I just love his expression here. This is how his face lights up, several times a day. He is just so happy!!! So, I've mentioned it before that every day Daddy brings Andrew to my work for lunch. I feed him and then we hang out together. It's the best 1/2 hour of my day! Here is Andrew playing with the highlighters and calculator (his 'toys'). By the way, I realize Andrew has no pants on. Daddy CANNOT for the life of him take the time to put Andrew's pants back on after he changes him. It is annoying, but oh well. There are worse things... 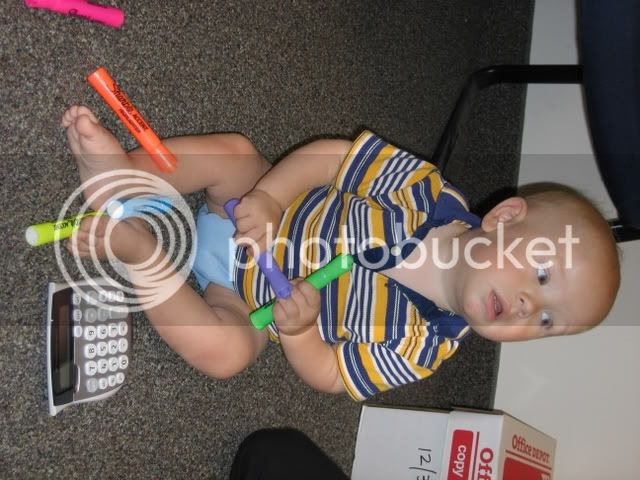 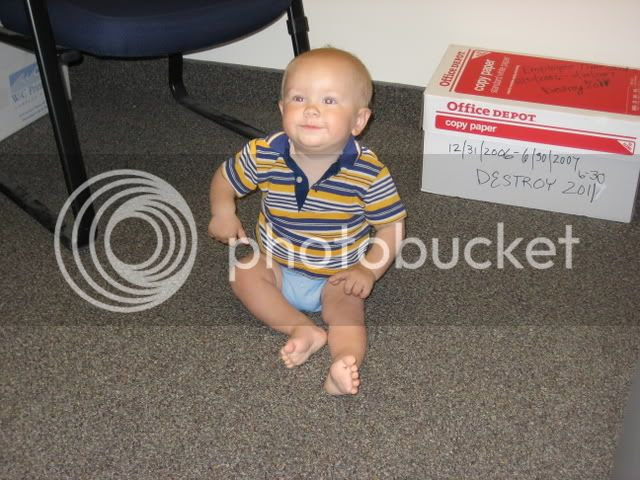 Mommy and Andrew at the computer! 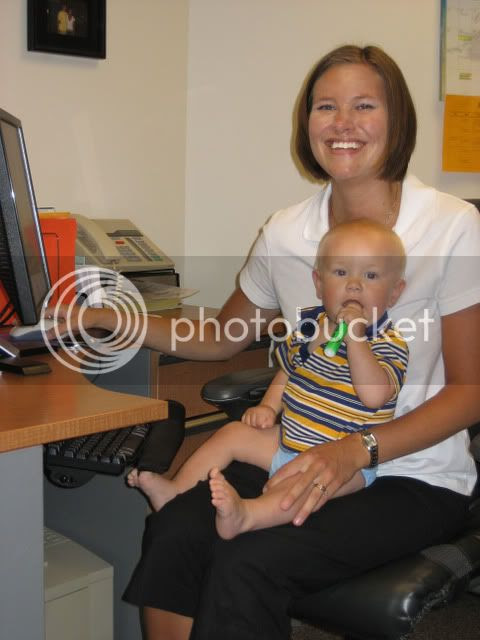 Haha...I call this one "Mr. Director" 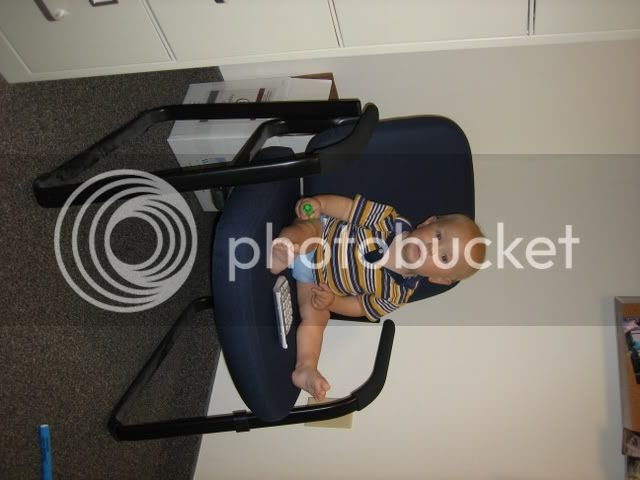 There, now you know what my office looks like and you can picture it in your head when I talk about work. By the way, I have my own office so I can close the door and I have something I hang over the little window so nobody can see my boobies or us acting goofy after he is done eating. :)
Posted by Sarah at 9:55 PM 2 comments:

He took a 2 hour nap for Daddy this morning! This is seriously a rare event. Before I left for work this morning, I was nursing him and he fell asleep while eating (he was up at 5:00 today, about an hour-and-a-half earlier than his usual time). That was 7:40 when he fell asleep and Daddy said it was just before 10:00 when he woke up. Woohoo!
Posted by Sarah at 6:44 PM No comments: