Andrew is growing up so fast! He is almost starting to take on more of a "toddler-ish" look. Daddy took these shots of us the other day.

In other news, we found a system that works for us during the day. Daddy brings Andrew to me at lunch (it's only 6 minutes away from home) and I do a superfeed at that time. He is able to go from his morning feeding at 7:30 until noon, and then pig out and go until I get home at 4:00.

This new plan came to be after 3 more days of bottle refusing by Andrew. I was coming home to feed him at 10:00 and then having Daddy try a bottle at 1:00. Yeah, that worked for 2 days and then Andrew decided he didn't like it.

This is way easier. He is taking in more solids, and his belly is bigger and he can eat more at a time. He is still taking in all his ounces of milk, just more at once. Major celebrations here! I am done stressing at work, worrying about whether or not he is taking bottles for Daddy.

In other news, Andrew now SCREAMS whenever we eat! We can't sneak anything by this little guy. I decided to share some raspberries with him and he went nuts for them! We buy the bags of frozen berries at Woodman's and eat them semi-thawed. Super good! The pieces I give Andrew are small enough--don't worry. It also helps that he has 8 teeth and is learning how they work! Bananas are another hit--the "real" ones, not the mushies. :) 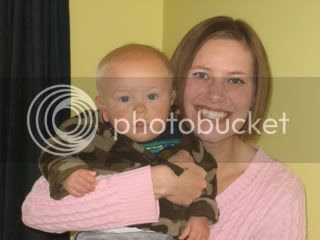 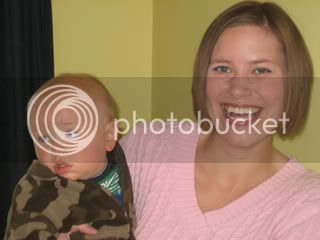 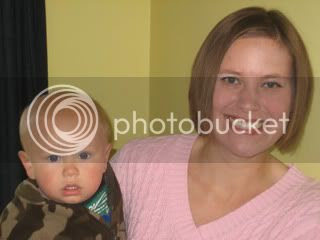 Labels: feeding, mommy and me, raspberries

I've been super busy at work and we've had a lot going on at home. We got a new car!!! We've been looking for 6 weeks or so for a 2nd vehicle to be our primary vehicle. We've really wanted a Ford Focus and we (at first) wanted the wagon, but they are really hard to come by around here. We upped our dollar amount and found that there's a lot more choice in the newer vehicle range. We ended up getting a 2007 Ford Focus Sedan. It's so cute! It's white, 4-door, fun-to-drive car that gets great gas mileage. I was super excited that it is LATCH equipped and got Andrew's carseat installed (it's no fun when you have to deal with the regular seatbelts like I did in the Nissan, although I would probably be an expert at it by now since I've messed around with it so much). Oh, and the new carseat we got is the Evenflo Titan Elite. It's a convertible seat that goes up to 60 pounds. Andrew can stay rear-facing longer and it has the 5-point harness, which I love. Here's the car (dealer photo, so that's why it looks like it's in a ginormous garage). 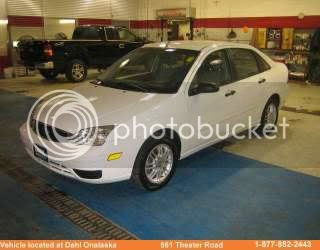 In other news, Andrew is doing some really cute things! Today my mom watched him while I was at work (to give Daddy a break so he could clean the garage and take care of some other duties around the house). She puts him in the Bumbo seat and he loves this Fisher Price piano thing she has and he started dancing! I came over after work and was like, "When did he learn that?" and my mom said she was showing him how to dance to the music and he caught on fast! So cute. We also got to visit with our good friends, the Shudas. Mom (Jane) and Daughter (Jackie) came by because my mom is going to hem up Jackie's prom dress (she's 16 going on 21). I used to baby-sit Jackie, starting when she was just 6 months old. We're pretty close and I think of her like a little sister. They were all excited to see Andrew. Jane kept saying how beautiful he was. :)

Here are some recent pics. In these first two, we were in the car (the older one) and we were playing Andrew's favorite game where I hold a toy up by the ceiling and let it drop (soft toys only). He giggles hysterically. It is so cute and it's also a good way to distract him when Daddy runs into the store. I sometimes would rather just stay with him in the car than unbuckle him to run in the store for 2 minutes. Daddy is always wanting to go to Menard's, to look at stuff he doesn't really need, only to come out empty-handed. 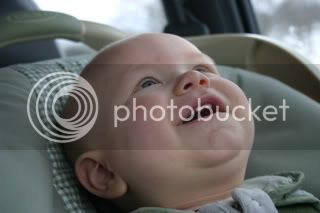 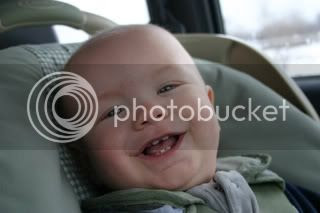 The other day, he was being SO cute in his crib. I snapped a couple of shots of him. 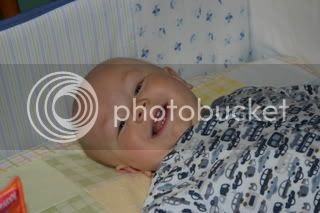 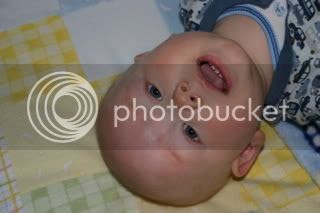 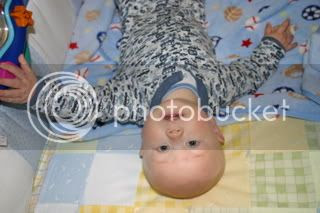 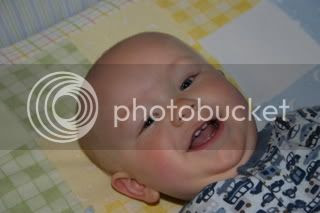 Bathtime! What can I say other than he loves it. We got this bath ring from my Aunt Lori whose kids have all outgrown it. He is such a big boy sitting up in the tub! 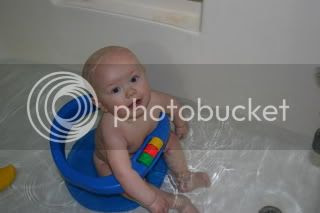 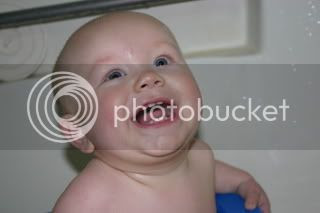 The only other news is I think he is working on his 1-year molars. He's been drooling a lot, pursing his lips (he does this when he's teething), fussier than normal, and the gums feel swollen there. Yes, one year molars and he's not even 8 months. I hope they're not coming already! He's going to have a toddler mouth on a baby's body.

Solid food diapers reek!!! Ugh, I would take the runnier, better-smelling diapers any time. Ever since we've added solids (and we're only doing like 1/3 of a jar once a day), his diapers smell worse than adult poo! At least they're pretty easy to clean. We haven't had a blowout in a long time. That part is nice.

Speaking of solids, he is loving sweet potatoes and not so much into the fruit. I thought it'd be the opposite. Sometimes I think it's because the fruit is colder than the warm foods and that's why he makes faces. We'll keep trying. We also tried Cheerios last week (just a few, like finger-food style) and he likes them! He actually fussed when he wanted more. Also, when I'm eating, he now knows what spoons are so it's hard for me to sneak a meal in without him trying to steal it from me! I give him sample bites if it's something that is not too textured. He is still breastfed 90 - 95% of the time.

That's about it! Just wanted to let you know how we've been!
Posted by Sarah at 8:02 PM 1 comment: