It's bittersweet. My baby has grown so much in the past five months! 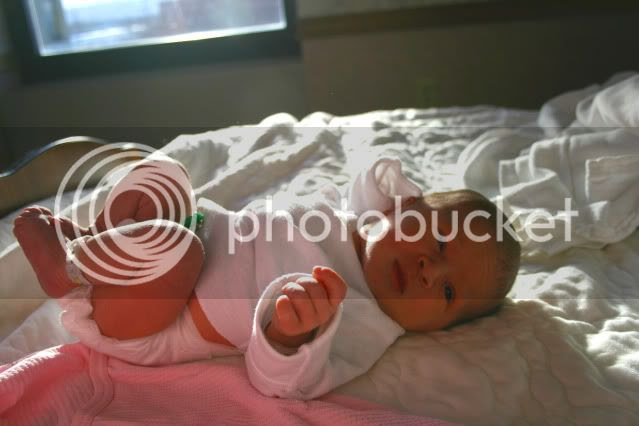 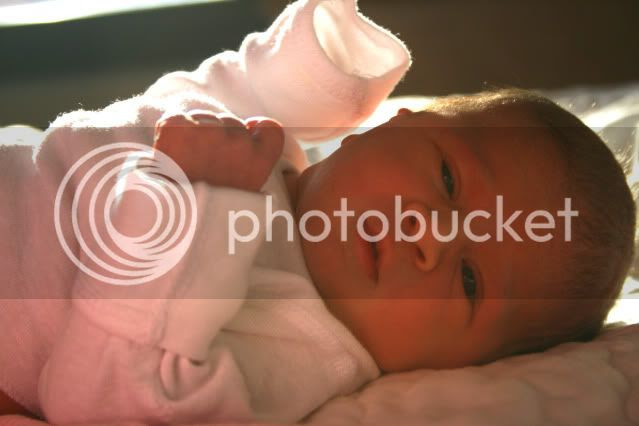 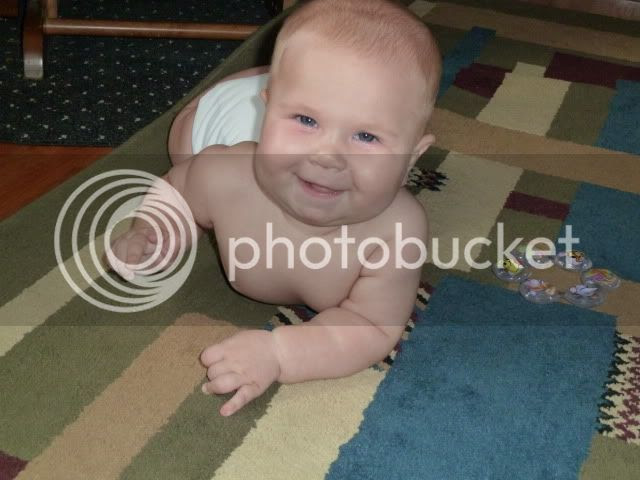 She has her two bottom teeth in (and they are starting to become noticeable when she smiles!), she can sit almost all the way up, unsupported (just leans a little bit now), she reaches for and can grab things, and she is just a happy, squealing bundle of joy. I love her to pieces!
Posted by Sarah at 7:02 AM 4 comments:

A couple new pics of the children. 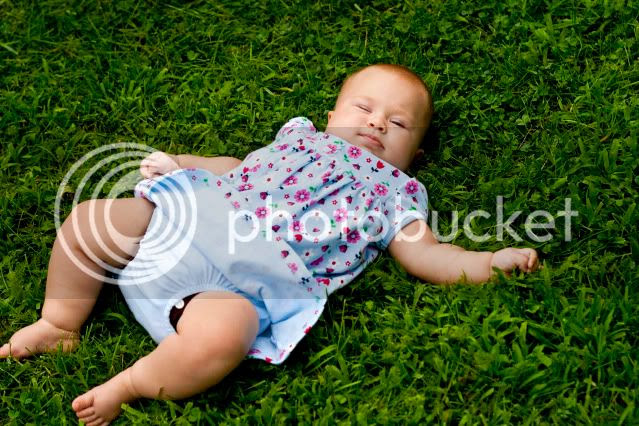 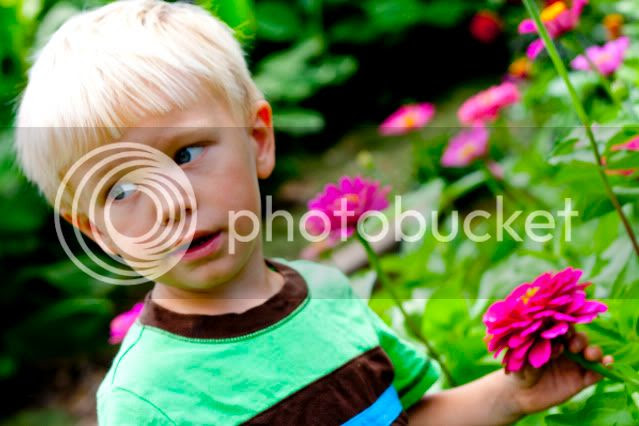 These are from the hubby's point-and-shoot cam: 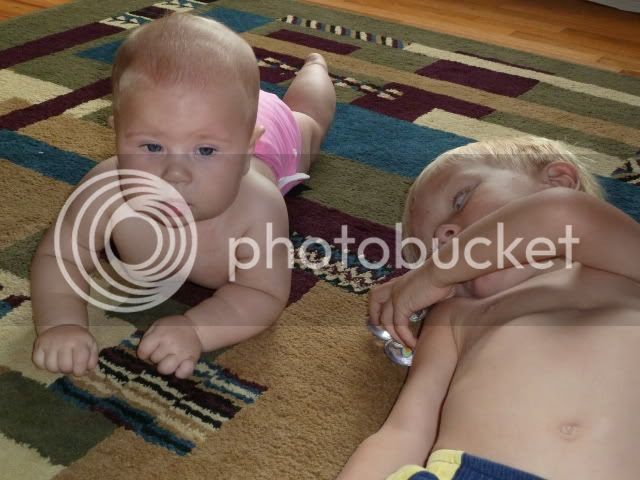 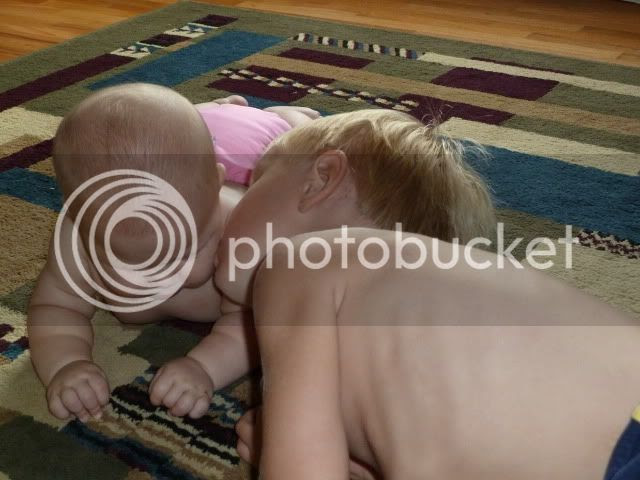 I think I want a tattoo.

I want something with my kids' names and I think I want to do either upper arm or ankle. I have never had a tattoo, so I have a little bit of apprehension. However, I am going with something small so it'll hoepfully hurt less.

Any of you with tattoo experience -- can you help point me in the right direction? I am going to try and come up with a little design that somehow has aqua in it (my favorite color) and something "mothering" related but my mind is drawing a blank. Any ideas?
Posted by Sarah at 11:40 AM 7 comments:

This is mainly for my own records because I am keeping the dates in my head until I write them down in her baby book!

Saturday Elise's second tooth came in and she also rolled tummy to back, meaning she can now roll across the room!

Andrew has a new funny phrase as well. He spilled some water on his shorts in his carseat the other day and said, "Spilled water on self. What am I sposedta' do??" It was hilarious. :)
Posted by Sarah at 8:54 AM 1 comment:

First off, earlier this week, Elise got a tooth! Also, the one next to it should be through tomorrow. 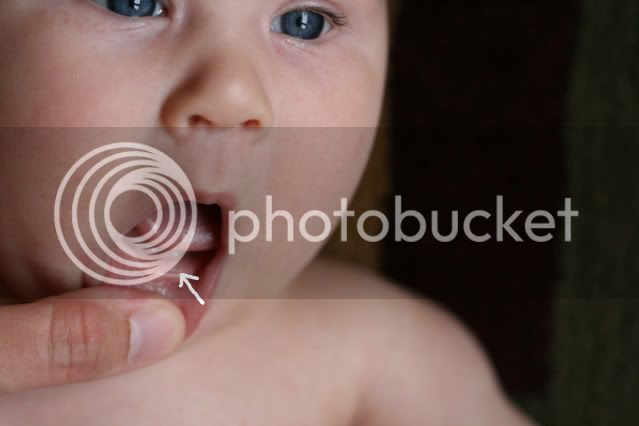 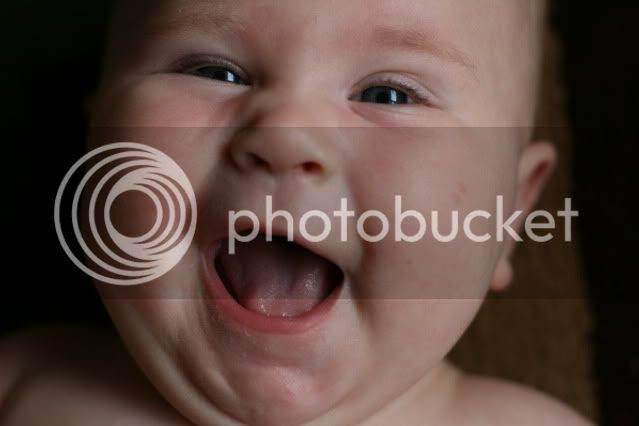 Good thing she has a super cute amber teething necklace! 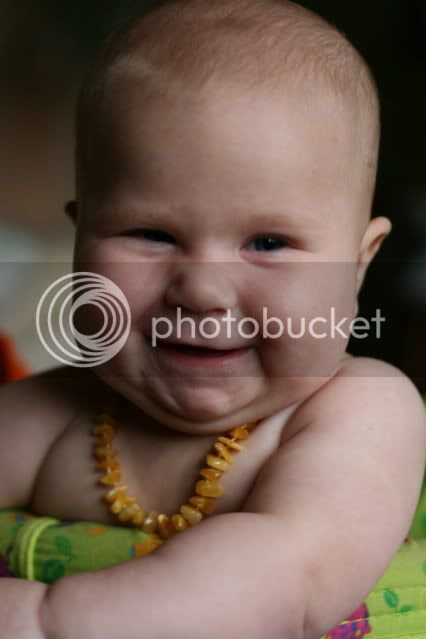 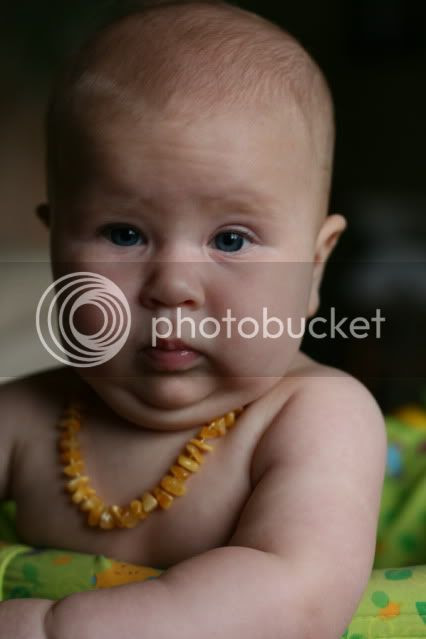 And then tonight she had fun doing this! At this rate, she'll be sitting by 5 months . . . 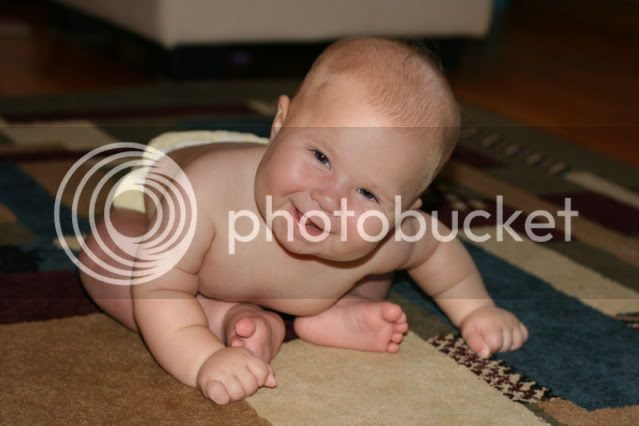 Get BPA out of your diet!

It really is frustrating, to me at least, how many things contain bisphenol-A (BPA). I am happy that they have removed it from a lot of kids' products (bottles, sippies, and eatery) but it is still found in many suprising places. Did you know that soda/aluminum cans and canned goods are lined with a plastic coating containing BPA? It was found in 96% of cans tested. Bottle fed babies have the highest levels of BPA, due to the fact that infant formula cans are coated in BPA, and those fed liquid formula receive the highest doses of BPA -- up to 13 micrograms per kg of bodyweight a day. Combine this with a bottle containing BPA and those babies are getting a double whammy -- although most manufacturers have voluntarily removed it from their products due to the upcoming ban. Those pretty, polycarbonate bottles (the old Nalgene ones before they came out with the new ones), advertised as being shatterproof, contain BPA.

The levels can be surprisingly high, especially when one takes into consideration the amount of different products containing BPA. Once we discovered this, we banned canned goods in our house (this was approximately 2 years ago when we got rid of probably $50 worth of canned goods). For us it is simply not the risk. BPA is an endocrine disrupter, which is particularly alarming in children, whose bodies are still developing. Endocrine disruptors can mimic natural hormones (estrogen) in the body and it may lead to early puberty. Other things are still unknown, but BPA could be linked to cancer -- a 2010 study concluded that the risk may be increased with BPA exposure. There have also been concerns on its effect on brain development. It's not a chance I am willing to take simply for convenience. Besides, we like making homemade food because it tastes better (our circa 1984 microwave that came in the house has barely been used and we only really keep it for the clock!). Dental sealants are another source of BPA, which is why we will not use them on our children (too late for me; I had them put on my molars as a child).

What is the oldest memory you have?

I remember being in my crib, so I was younger than 2. I think I was more toddler than baby at the time. I was lying on my side and I remember hearing my pulse (you know how if your ear buries into the pillow, you can hear that pulse?). I didn't know what the sound was so I started calling for my mom. She came in and comforted me and sang, "Tomorrow, Tomorrow" and I felt all better and went to sleep.

I also remember having my diaper changed in the hallway. The carpet was a reddish color (lovely early 80s brick red) and I was lying in between the two bedrooms at our old house. My mom laid me there and then came back and changed me. I had to be pretty young because we were all potty trained by 18-20 months.
Posted by Sarah at 9:31 AM 1 comment: