Just a few reasons to nurse past a year

I occasionally encounter questions. I nursed my son for 25 months and am now at 14 months with my daughter, yes, while pregnant! I know some of my other fellow mommies are in the same boat, so I am sharing just a few of the wonderful reasons why nursing past a year is so important.

■“Nursing toddlers between the ages of 16 and 30 months have been found to have fewer illnesses and illnesses of shorter duration than their non-nursing peers.” (2)

■“Antibodies are abundant in human milk throughout lactation. In fact, some of the immune factors in breastmilk increase in concentration during the second year and also during the weaning process.” (3)

■There is “a significant inverse association between duration of lactation and breast cancer risk.” (4)

■Breastfeeding beyond one year “can reduce your risk of ovarian cancer by about one-third.” (5)

■“The longer a woman breastfeeds, the less likely she is to get endometrial cancer.” (6)

There are, of course, more reasons, but these are some great facts to throw out there in case you should encounter a skeptical or nosy friend or family member!
Posted by Sarah at 11:33 AM 4 comments:

It's after midnight so I can say that now. I am on a sugar high from the little bit of Easter candy I did eat today. I also took a nap earlier while BOTH kids were napping, one of them (Andrew) next to me, because he crawled up on the couch and laid behind me and said, "I want to sleep by you too" and fell asleep with in 5-10 minutes.

I love Andrew's vocabulary. We dyed Easter eggs on Saturday at my mom's house and I wrote his name on an egg and asked which color he wanted to make it. He pointed to the cup with the blue dye in it and said, "I want indigo". It was so funny -- my mom and I both cracked up. DH said earlier in the week, he thinks he remembers Sid the Science Kid mentioning it. Go PBS Kids! Love that channel.

Easter is not really anything religious for us because we don't belong to a religion, but it is a traditional holiday. I did non-candy Easter baskets for the kidlets and they enjoyed them. Andrew got some activity books (learning to write letters, numbers -- shapes, etc.), a Curious George storybook collection with 8 stories (he carried this around most of the day), more books, crayons, sunglasses, his own water bottle, and a bunch of little things from the Dollar Tree. Elise got pajamas, several spring/summer tops (she barely has any short-sleeved shirts), shorts, socks, a book, and a new toothbrush (her old one became a chew toy for teething -- she's working on 4 molars). 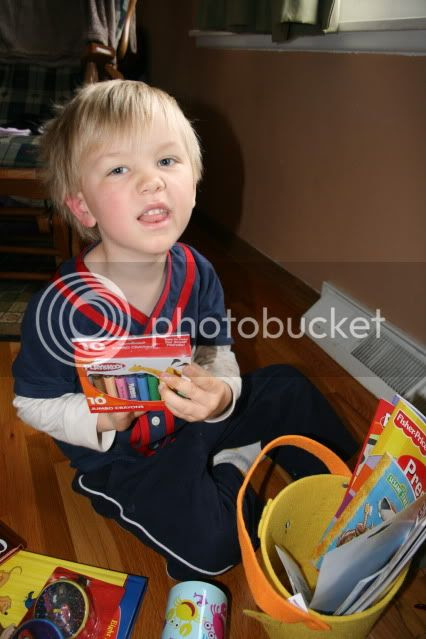 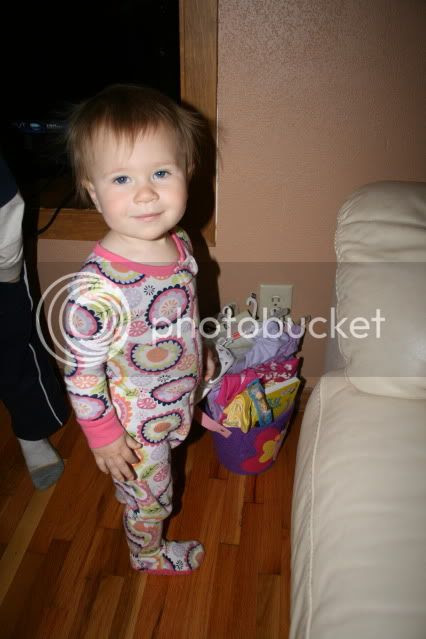 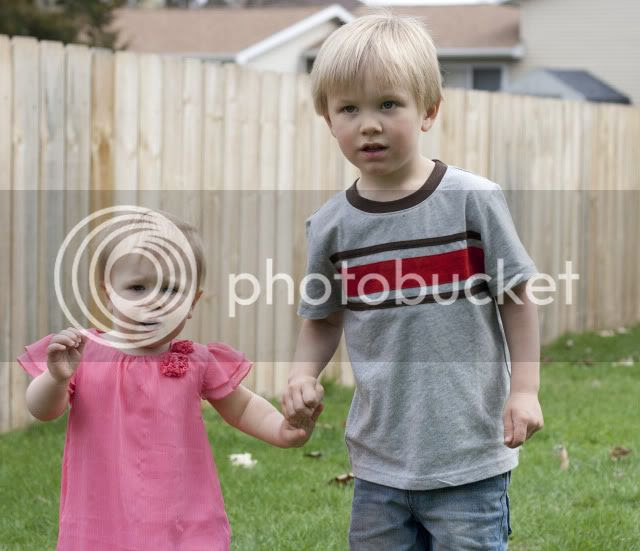 I took off today. My friend was going to come into town but something changed with her hubby's schedule, so now she can't, but it worked out okay because now I can spend the day with my family. I also have a midwife appointment at 11:00. It's nice to have a non-weekend day off, and those 3-day weekends feel so much longer!

We painted our kitchen Friday night/Saturday. It was formerly a lemon yellow color and it's now a color called "Brick Dust", which is a nice, warm reddish color (with some brown maybe). I have hated the yellow for awhile now. It's a color that kind-of starts to look dingy up on top if you get any dust and it was just "blah". I originally bought reddish colored paint for the kitchen when we bought this house (over 5 years ago) but we knew within moments of starting painting that it was WAY too red. Like, blood red. No good. So then we went with the lighter yellow. Now we're very happy. My kitchen is also the cleanest it's been probably since we moved in! We got rid of some clutter. I love the feeling of having a clean house. 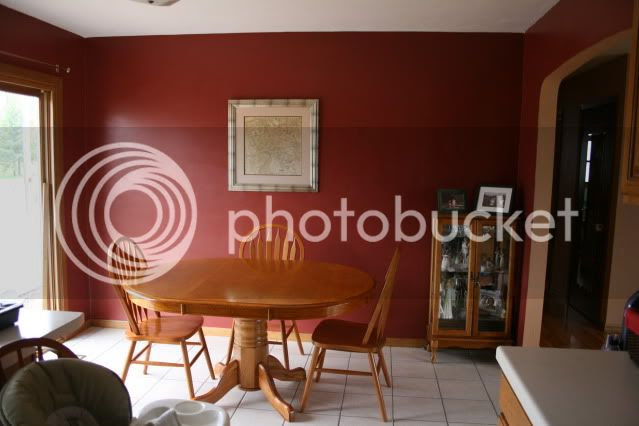 I am sure there will be nothing to report from my appointment tomorrow, but I'll keep you posted. Take care!

This past week has been pretty busy for us -- lots of little projects we're working on around the house, and just cleaning that has been keeping me busy.

Andrew has been taking walks (or rather, runs) with me, and I've been getting some exercise now that the weather is a little better. It definitely feels good to burn some calories after basically sitting on my ass all winter.

The hubby is excited about his fruit trees, which are just budding now. Nothing is blooming yet, but that's probably for the best since we are still getting some cold weather and even a little bit of snow.

Andrew still has a TON of energy, but I find reprise when I ask him if he'd like to line up his cars. He does this 2-3 times a day: takes all of his Matchbox cars and lines them up. It occupies him for 10-15 minutes. I have started taking pictures because I call it his "car art" because he is creative with it and arranges them in different patterns (those of you who are Facebook friends with me have seen his creations, I'm sure).

Elise is learning a few new words and it's really cute to see her brain make all those connections. I can ask her to grab me this or that and she will bring it to me. I love this age. I would say one of my favorite ages is around 16-18 months, just because it's a very cute age. After that, it seems it's all an upward swing to full-on toddlerhood, whereas before that, they are still on the brink of babyhood. 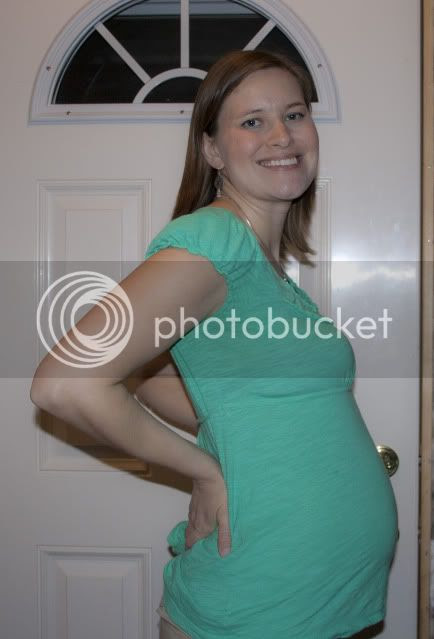 I think I have a future athlete on my hands!

Yesterday was a gorgeous day here in Wisconsin. We actually broke the 60 degree mark for the first time since last fall (62 was the high, in fact). After work, I decided to take the kids for a walk. I put Elise on my back in the Boba carrier (I absolutely love that thing! Easiest carrier to use -- I have her on in less than 20 seconds, vs. all the fumbling I did with the ring sling). Andrew wanted to walk, or rather, run, as I quickly found out! He ran the entire three miles (3 miles! And he's 3!) without stopping. Wow. I was walking as fast as I could (and I go at a pace of about 4 miles an hour with her on my back) and he was still ahead of me the entire route. I had to yell when we would reach intersections -- I am still teaching him how to look for cars -- but he just kept his pace the whole time. When we got back to our block about 40 minutes later, he started crying because he wanted to keep going. When I say my kid has a lot of energy (and people don't generally understand HOW much energy), I mean my kid has a lot of freaking energy. I really am looking forward to getting him into sports because I think it would be a great outlet for him. Plus, Daddy is all proud because Andrew is a lefty (neither of us are, but DH's dad was) and that's apparently a good thing for baseball, especially pitchers. The Brewers could use some good players in about 20 years, eh? ;)
Posted by Sarah at 8:29 AM 3 comments: