Wow! I was trying to post for almost 24 hours. Anyway, here is a new pic of Elise and me. I wanted one with her brother, but he was in a crabby mood (needed a nap). 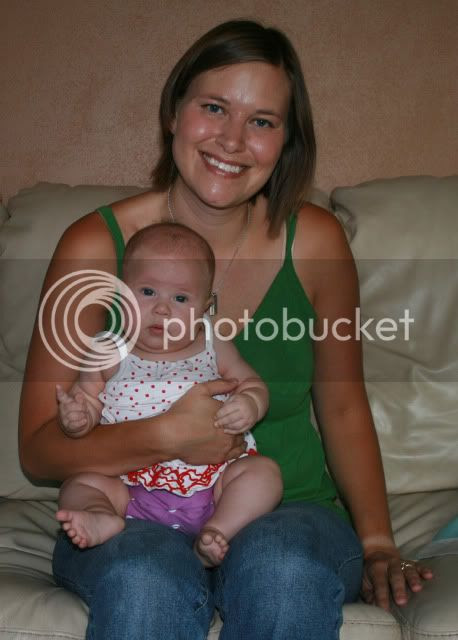 Being back at work has been all right for me. I was expecting it to be so much worse being away from two children, but maybe it was better since I've done it before.

The bottles were hit and miss -- she'd take it one day, then not the next, so I am back to going home twice a day to nurse her myself (same arrangement I had with Andrew) and that is going marvelously. I get to bond with her (and Andrew) during the day and while I'm only home for 15 minutes at a time, it makes my day seem so much better!

Elise is officially a thumb sucker! She found it a week ago Saturday and now she automatically rolls onto her left side when she's on the floor. Thumb in, baby happy. :) It works really well for naptime when I'm at work because Daddy can just put her in her crib and she doesn't cry at all -- she just looks for the thumb. When I'm around, she must know, because she does still like to be swaddled/shushed/swayed to sleep, so that's nice for both of us. It's amazing how two babies can be parented the same and turn out so differently -- Andrew was a major comfort sucker, but Elise only wants to eat when she's hungry. I can't really think of many times where she fell asleep on the breast, except in the beginning.
Posted by Sarah at 5:22 PM

Oh man I just LOVE her pudgy rolls!! SO SWEET!!

And Mama, you look FABULOUS!