I have absolutely no idea if anyone is still following this blog, but I wanted to put my thoughts down and get back to the reason why I started this blog: to share my feelings, because as time goes on, I don't remember the day-to-day musings I have... only the big milestones with my kids. And heck, even some days, I have no idea what I did yesterday, as in my constant sleep-deprived state, my short-term memory can be terrible.

First, a little update on the kids. Andrew has been keeping me busy with his adjustment to full-day kindergarten (last year was half-day pre-school). He is still going to weekly OT at the clinic, and his therapist is wonderful. The only thing that is troublesome is that at school, his behavior can be great one day or maybe two days in a row and then he will have an atrocious day, which results in him in tears, the principal writing a note to send home for me to sign, and phone calls from the teacher on suggestions for his behavior. She stated the other day that in 20 years of teaching, she has never seen behavior like this. Talking to other parents of sensory kids, I am finding his behavior is somewhat typical, but I think Andrew is able to "hide" the fact that he has "issues" because he "seems so normal". He's not in a wheelchair, he doesn't have a speech impediment, he can carry on a conversation just like any other kid, so I think oftentimes, adults and other kids alike will be shocked when they see him suddenly on the ground, crying as if it's the end of the world when told he can't go to Grandma's house or have another cookie. Public places are still a struggle for him. If we go to anyone's house, he starts foraging through the cupboards, looking for a snack, and one of the things that is totally characteristic of ADHD kids is that need for immediate gratification, versus a delayed reward. Andrew doesn't care about consequences in the moment, and he is that mouse that would go in the trap for the cheese because his need takes over his logic.

His actual diagnosis from October, 2012 is Sensory Integration Disorder and motor dyspraxia (specifically fine motor). At the time he was being monitored for ADHD as well, although it is pretty apparent he has that too. These disorders all tend to go hand-in-hand, meaning many kids with sensory issues also have ADHD, or kids with a specific learning disorder also have another impairment.

I attended a meeting last week, an interdisciplinary team meeting with his teacher, the principal, the school social worker, the guidance counselor, the school OT, the adaptive physical education teacher, and the EBD Program Specialist. The meeting closed up the 60 day review period they had to determine Andrew's eligibility for special education. We did, as a team, determine that he met eligibility for an IEP under OHI (other health impairment) and he also meets the criteria for EBD services, as his behaviors are frequent and prevalent. The one area they all saw as an area of concern is his aggression, which  caught me a little off-guard because Andrew is not "aggressive" but when he gets upset, he has thrown shoes, knocked over the bookcase at school, thrown his scissors down on the floor (because cutting is hard for dyspraxic kids), etc. So he's not bullying other kids but he does have problems with voice inflection so he has yelled at kids and teachers.

The options that came about from this meeting are:

1) Keep Andrew at his school for the remainder of the year, adding in the services he now qualifies for (one of these I am really happy about is that he will get 5 days a week of quality time with the guidance counselor whom he adores -- they work on communicating with words instead of tears/yelling and they also do relaxation activities like yoga -- Andrew really likes it)

2) Transfer him to a school with EBD services, as his school is too small and doesn't have them;

3) Keep him at his school for this year and then transfer him to the new school opening up next fall, which has EBD services too. EBD services, for those not familiar -- EBD stands for Emotional and Behavioral Disorder and an EBD classroom would allow Andrew to be in a regular classroom for the day, but the EBD room would be there when he needs it, and would be equipped with anything he might need -- anything to accommodate a kid with sensory or behavioral needs.

Most likely, we are going with Option 3, as I have just learned that one of the Childcare workers at the Y (where he is now "banned" from) is doing her clinicals (student teaching) in Andrew's classroom and he clicked really well with her.

That is my update on Andrew. It's been a lot to take in. I am thinking we will be discontinuing his current OT at the clinic -- let another kid take his spot -- as if he is able to get what he needs at school, then it's more convenient than me leaving work 1.5 hours early every Wednesday. The school OT did find a lot of sensory-type things in her assessment of him and in the meeting, she said she WANTS to work with Andrew. I was impressed with her, and she seemed intelligent and resourceful.

Moving on to the other kids: they are very typical for their age. Elise is four now and coloring at about a first grade level. She goes through a coloring book a week, on average, and is loving coloring and puzzles. Jameson is 2.5 and enjoys playing independently and following his sister around. She is "bossy cat" and she tells "baby cat" what to do and they crawl around the house together, meowing. It's adorable! Jameson is refusing potty training but we are able to catch a few. It will come in time, I am sure. Elise is really into My Little Pony and has an endless supply of dresses. She changes her clothes at least 3 times a day.

As for me, I am working out 6 days a week: 3 days of straight cardio (36 minutes) and 3 days of strength training (1 hour). I have lost 3 inches off my waist since I started, but am up just a few pounds since starting. Because I do see a change in my muscles, I am attributing the gain to that, and am trying not to focus on the scale. I am; however, focusing on healthier eating. I have become a tea "addict" and drink 5-6 cups a day. I love it, especially black tea (Black Cherry organic, at the moment).

Oh, and on March 13th, I got a tattoo! I have been wanting one for over a year and I finally did it. It barely hurt, like seriously 1/10th of the pain I anticipated. It would be akin to taking a calligraphy pen and writing hard on yourself. Maybe a slight "carving" feel to it, but it wasn't bad at all. It took all of 12 minutes or so, but I could have withstood it longer. Not bad at all! Obviously it's my kids' first initials and their birthdates. I originally wanted it on the outer part of my upper arm, but decided on a more discreet place, just in case I have to "hide" it at work or something. The tattoo artist suggested inner arm, and a google search yielded plenty of results where women had them on their inner bicep and I thought it looked great. It's also apparently the celebrity "go to" spot now, not that I care what celebs say or do. I am so out of touch with pop culture! 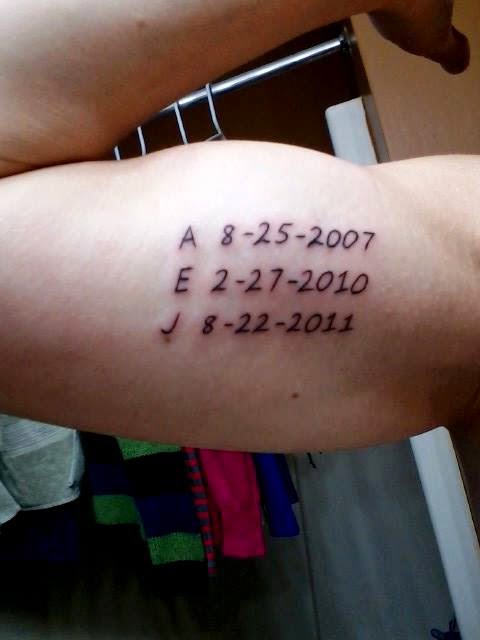 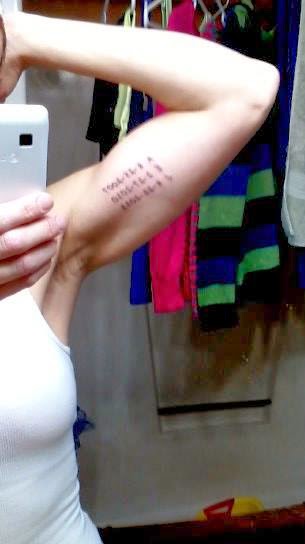 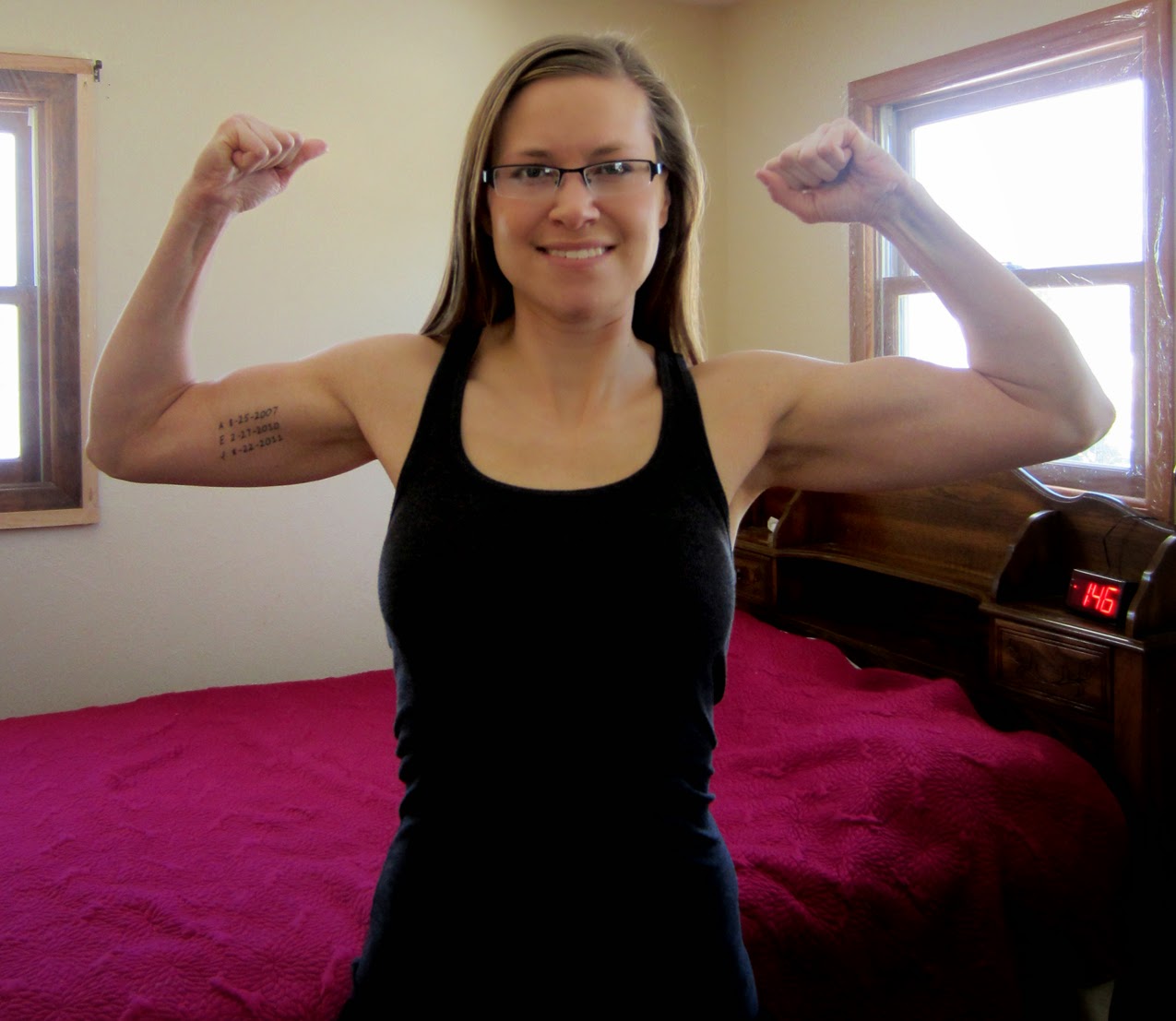 I am still working full-time and doing photography on the side. My spring/summer busy season has just begun, with a newborn/family shoot I did yesterday.

The past year, for me, has been about "finding myself" and figuring out where I fit into this thing called life where the primary focus has always been my kids. I never envisioned doing some soul searching, but I like what my search has yielded. :) More good things will come in the future.

I think that's enough typing for now. I hope I still have followers. LOL! If not, this is here so I can come back to it.
Posted by Sarah at 10:28 AM

You have some serious guns and my hat is off to you and all you do with your son. My guy is a total handful for me without the principal involved, I can't imagine how stressful it must feel to try to keep him on the right path!