I forgot to post that I got fed up with waiting for that part from Once Upon a Child. Several days had gone by and I hadn't heard anything so I called them and then they said they would call the manufacturer. Two or three days later, they call me and tell me that the manufacturer needs a different model number. I could not come up with a different magical number from my ass or elsewhere because the same number on the instructions was the one on the crib, so there was no possible other model number. I even gave them the manufacture date (November, 2006--how hard can it be for the damn company to figure out which model it is?).

Another week went by so I took the effing thing apart and loaded it up in the car (at this point I was pretty mad because we wasted another two weeks, I spent over an hour assembling the crib, and OUAC didn't seem to understand that it's not safe to use a crib with a side that can detatch--that's the whole reason why the other ones were recalled). I also went online and found other people with this same crib who had the same broken plastic part on theirs. I then read a mother's post saying, "Don't use this crib; my baby died when the side detatched". That was enough for me.

Anyway, to make a long story short, Friday I was in the staff breakroom and talking to a co-worker. She was talking about this rummage sale she is having next weekend and she's selling all of her boys' clothing. I, half-kiddingly, asked if she was selling a crib too, because I had just gotten done venting to another co-worker about my crib dilemma.

"Yes", she said, "and you can have it. It's older and it has some scratches on it, but we are getting rid of it". I told her I'd give her something for it, but she didn't want anything.

So, we picked up the crib after work yesterday. Rob and I put it together right when we got home while Andrew tried to "help" by taking the screwdrivers and running with them (this problem was somewhat fixed when I put in his Clifford DVD). I then cleaned the crib up good with my Orange Plus natural cleanser, and it looks really nice! The crib is old (wow, 1988 is the manufacture date), but the old adage is true: the just don't make things the way they used to. No plastic parts on this. The parts that are plastic on today's cribs are metal on this one. Rob even replaced the four screws with some Allenwrench ones so that he could tighten them easier. The drop-side system from the 80s used metal rods instead of relying on the weight of the crib to be held up by plastic tabs. It is much safer and I think there were less recalls in the 80s and 90s. Why they ever went to the newer system is beyond me, but if it was to save $.50 by using plastic parts, that is pretty pathetic. When babies are dying from being entrapped, it's time for all of the manufactuers to re-think their process. The only cribs I found online that were created solidly were $800 and more. If you could get your hands on an Amish-made crib, they're super nice, but will set you back $1200.

I promised a pic, so here it is! Not bad for free! 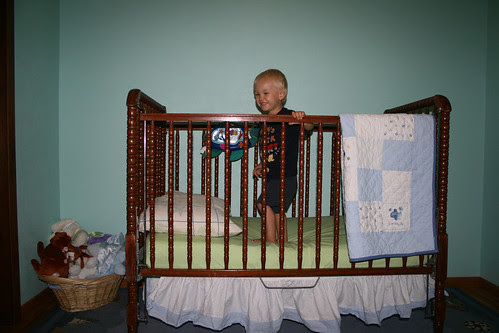 Last night was Andrew's first night in it, and he did cry more than normal, but it's because he's had a month of going to bed with Mom and being nursed to sleep. I took him out once because he was just going nuts and I thought he was going to sweat to death. One more nursing session and back in the crib and he was asleep within 5 minutes. He had his little stuffed birdie ("Bird-suh") and his toy power drill in his hands, but he was asleep. Very cute!
Posted by Sarah at 8:24 AM

That's awesome, I'm glad you got the crib issue resolved. That crib looks like it's in great condition.

those recalls are a PITA! I totally agree with you on the plastic part, looks like this one is a stong one!

There is a recall on our pack and play. We got one with a bassinet and changing table, and we plan(ned) to use it in our bedroom with the baby like we did with B for the first few weeks. Thier solution is to give out $40 vouchers (we spent $150 on it!) towards a purchase of another of this makers items, and to quit using the bassinet because that is where the problem is. Well, that is where we get most of our use out of the pack n play! and a $40 coupon? Im ticked. havent done anything yet.

Sarah, that is ridiculous! If something is recalled and they don't have a replacement for the parts, they should be giving you a full refund.

I would be calling the manufacturer and explaining the situation, that you want to use the bassinet for your newborn and that you don't feel it's fair for them to give you just a $40 coupon. I'm mad FOR you!

The crib looks awesome. I'm so jealous! Lex is getting a twin bed soon due to that darned recall, right now he's sleeping in it but in the toddler bed set up.

AWESOME! After you brought the whole crib thing to my attention (thank you!) I found a crib on www.diapers.com for around $200! (Not as awesome as FREE!) It does not even have a drop railing which is nice! http://www.diapers.com/Product/ProductDetail.aspx?productId=8402

although DH just told me we only paid $215 for ours from them. I ordered another crib in "pearl white" which by the way is ivory NOT white...so it did NOT match the 2nd hand changing table I had already bought to match my new white crib....blah! They did however, ship the other crib back for free and didn't charge me the $35 difference!

The crib looks great. Man that took long enough to get worked out.

Thank you for the sweet comment today on my blog! You are great.

Dang, Becky! You got a good deal. It's hard to find quality cribs without the dropside. I like the looks of that! DH was being cheap, though, and didn't want to spend more than about $70. I guess we just lucked out!