Time for an Andrew update.

Well, it wasn't easy taking him in on Wednesday morning for his surgery. He was happily playing with the toys they provided him in the room, especially the ball popper. He was laughing hysterically and putting things in there that weren't even balls. 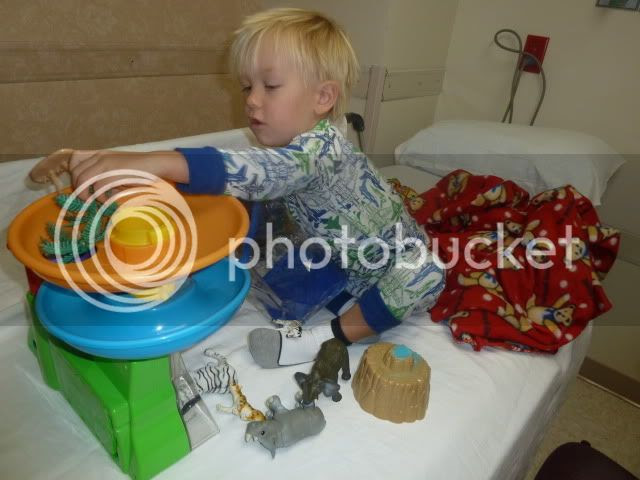 That was fun. The balls were going all over the room. My mom also showed up to be there for Andrew, and for us, and it was great (because afterward, she really helped by grabbing things that we needed as I was lying in the little bed with Andrew). 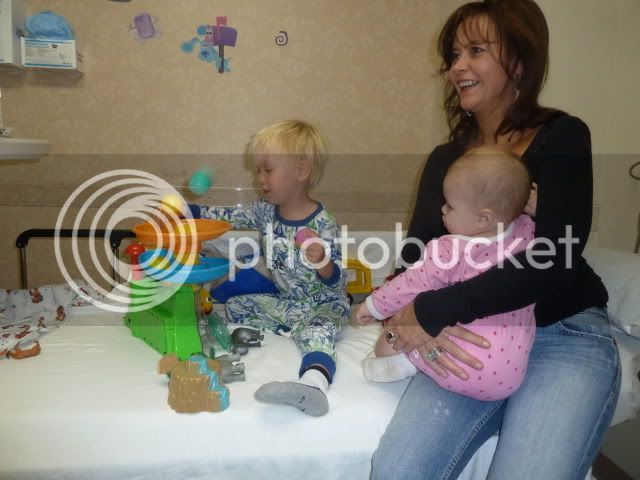 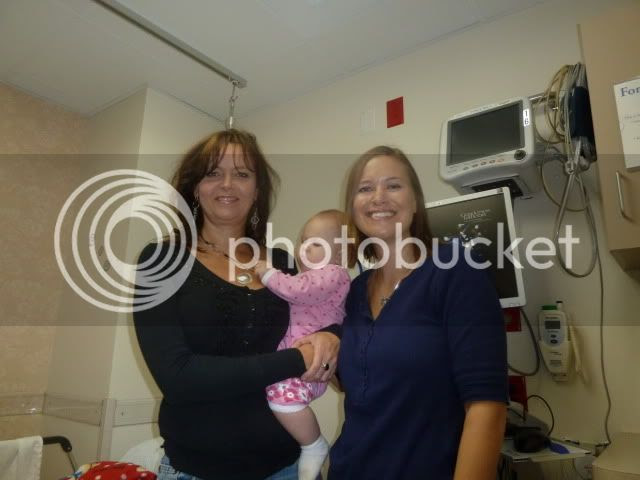 When they gave Andrew the Versed, that was a little strange because he started acting a little silly, woozy -- drunk, basically. It was strange to see my little 3-year-old under the influence of a narcotic.

About a half hour later, they had me gown up and we took him back for the surgery. They laid him on a bed and strapped him in and as they put the mask over his face, I just held his hand. Surprisingly, I kept my composure. I gave him a kiss and told him I loved him and he was out within a minute. I walked out and we waited. 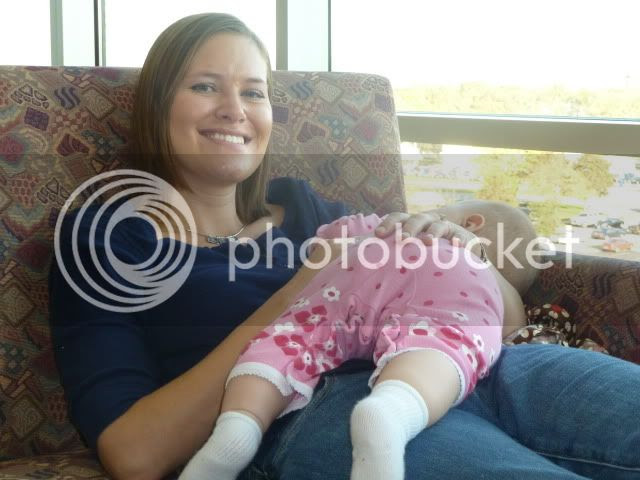 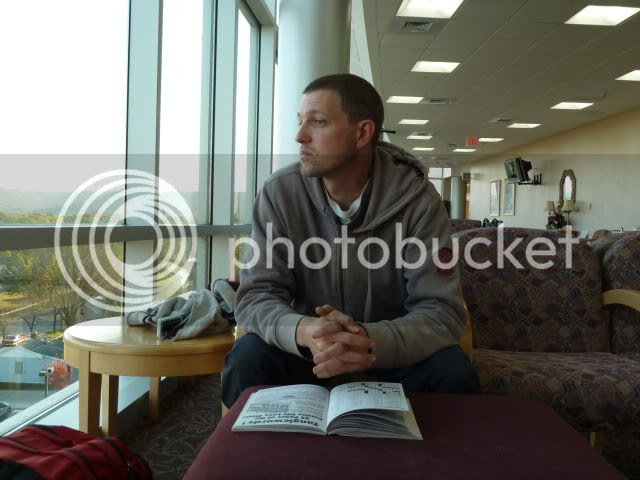 The procedure took a half hour. The surgeon/ENT came back and told me it went well and he had minimal bleeding. His tonsils and adenoids were both a 3, so pretty big (this is on a 1-4 scale).

A little while later, the nurse came back and said she was wondering who would be able to help when Andrew is restless. "You mean, thrashing?", I asked. "Yes", she replied.

I went back there and I could hear someone crying/screaming, but it didn't even sounds like Andrew. It sounded gargled and different (because of his throat being numb). I got into the bed with him and held him but he was basically delirious. They said kids wake up from the procedure very confused and that this was normal. I just held him close to me and kissed his head and pet his hair while the two nurses helped keep his arms and legs still (very tough to do when he's so strong). He was very scared and asking if he could get down. They told me that he couldn't because he would just fall as a result of the medicine. Eventually after about 15-20 minutes, they gave him some morphine down his I.V. and he fell asleep in my arms. We were wheeled back to the original room where I continued to hold him.

He eventually woke back up and would not take a popsicle or any fluids. They eventually gave him some through his I.V. 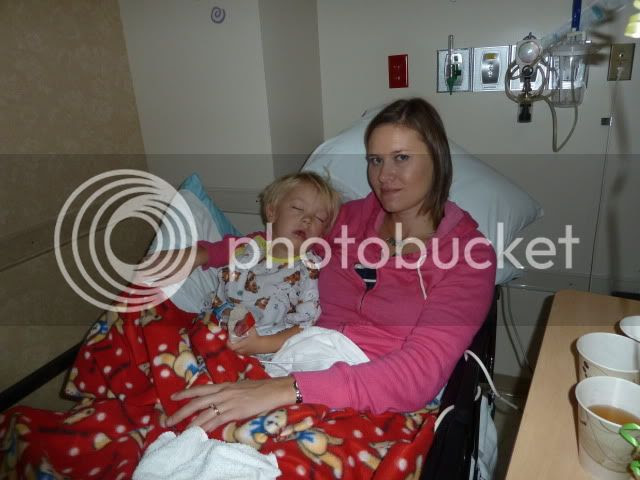 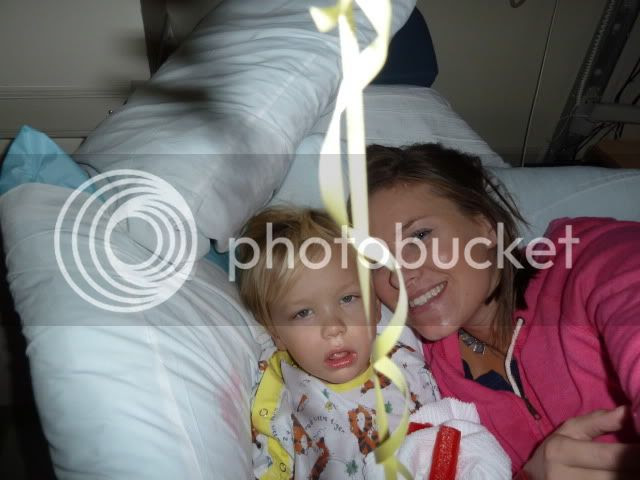 He was just so miserable. They said we'd be there for 1-4 hours, and we were there for the maximum time, mainly because he wouldn't take anything in. Just before we left, he threw up all over the place.

Andrew is getting his I.V. out here. I just loved his little hospital outfit -- it had tigers on it and was a little too big for him: 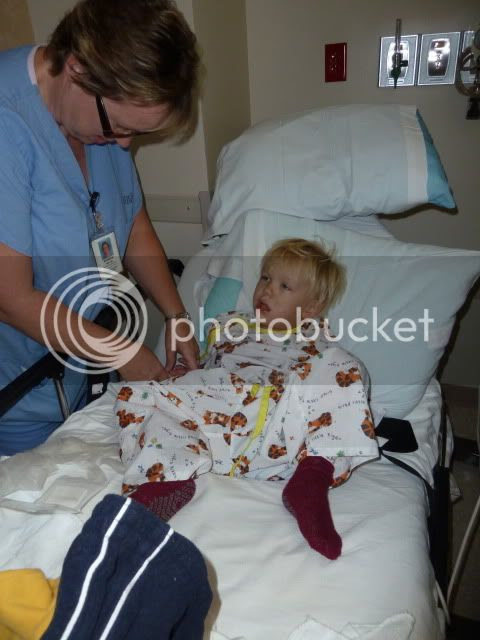 It's been a rough 3 days for us. Andrew will not take the oral antibiotics or the pain medication (Tylenol + codeine) so I've been giving him Tylenol suppositories (I called the nurse advisor and that's what she suggested). He threw up two more times on Wednesday so I pretty much said "enough is enough" with those stupid prescriptions.

The meds wear off about an hour before I can give them again and Andrew cries and says, "I need you, Mom" during that time and it's especially bad at night because he's been spiking a fever.

We got him to eat some ice chips on Thursday morning, a day after the procedure, and that was really the first time he took anything. Then, he ate some soup for lunch (yay!) and some homemade mashed potatoes and gravy for supper.

Surprisingly, this kid has not wanted popsicles! He normally loves them in the summer but I have not had much luck now. He did take most of one yesterday. He will not willingly take ice chips, but if I set a cup of them next to him on the couch, eventually he'll snack on them.

Thursday evening, he actually ran down the hall a few times and picked on his sister.

At night, he makes all these sounds because he has so much fluid back there -- he had the end of a cold when the procedure was done. For the first couple of days, he wouldn't even swallow his own saliva.

I have a feeling he'll be back to his old self in no time. It's just rough to think of how bad his throat must hurt right now and I pray that this surgery does fix his sleep issues. Most of his time now is spent on the couch watching his Penguins of Madagascar DVD.

Thank you all for your positive thoughts. We really appreciate them! 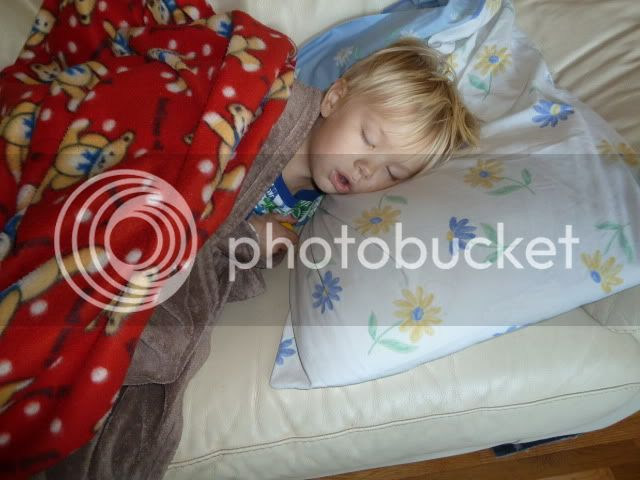 Hugs! I hope he's back to his old self in no time but is sleeping much better. You guys are in my thoughts!

Oh, good, I've been waiting for an update! Stephen woke up like that too... it was rough. I'd forgotten about it until you posted, otherwise I would have warned you. Does Andrew have the rotten meat breath still? I have VERY vivid memories of that...

I hope he continues to improve, and you can continue to help with his pain. (Stephen had a fever a few days after his procedure too, and the on-call tried to tell me he had a virus. Yeah, right. I think it's just a common side effect.)

Poor little guy! Surgery is rough! But once he's healed, he should be okay.

Oh, and that ball-popper toy must be a hospital favorite. We know it well. Most annoying toy EVER.

Aww, poor guy. Those pictures take me back to when Nicholas had his cleft palate closed. He woke up the same way too. It sounds like Andrew is doing a little better and I'm glad to hear it. I hope he heals quickly and his sleep habits get better.

MommyP: it's okay -- they said to expect that some kids wake up like that, but I didn't expect it to be that bad. It was like he was crying because he was suffering so bad and had no idea what was going on and it made me feel so horrible. And yes, he still has the bad breath going on -- I'm too scared to attempt brushing because he always fights it on a good day. The worst is when he wakes up in the middle of the night or in the morning, just crying and saying he needs me.

Thank you, all of you, for the support. This has been quite the ordeal and I can't wait until he's 100% better.

Awww, poor little guy! Little ones waking up from anesthesia are just so confused and it's hard not to take the confusion away from them. You did good though momma. Just being there for his was all he needed.

I hope he is healing nice and fast now. ~hugs~

Awww poor baby! I know three different kids that had their tonsils and adenoids out and all three of them had a hard time waking up and recovering from the surgery.