Okay, so my in-laws drive me nuts. Every time they see Andrew, they make a point of saying that he is "all daddy" and have never acknowledged that he looks like me too. He does get his blonde hair from DH, as well as his blue eyes (mine are blue, but more of a gray-blue), and his fuller lips. Anyway, my mom even says he is a mix of both of us.

So here I am, roughly Andrew's age. Please ignore the super scary clown overalls! Rachel noticed it when I put this on my Facebook. Not sure what my mom was thinking but this would have been 1981/1982 and maybe people were really into dressing their kids like that back then. :) 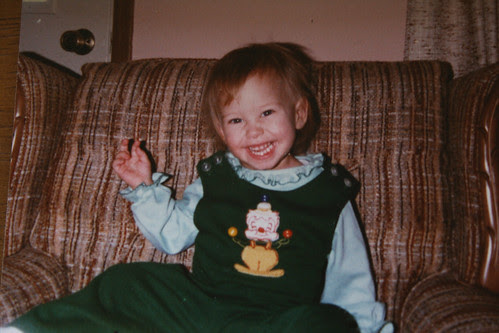 And here's Andrew; albeit, from last summer. His face has thinned out a bit since then and his hair got a lot longer (as I'm sure you've seen in more recent photos). Anyway, he was making his "big smile" face, which is when I think he looks the most like me. He's kind-of like me as a child, but more "albino". :D 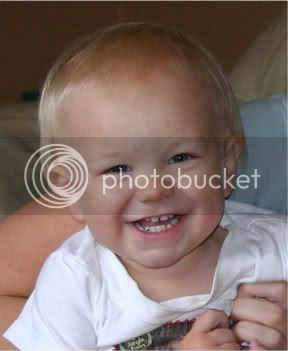 I always see you comment on Nancy's blog so now I'm stalking you! LOL! :)

I've always thought he looked like a good combination of you both. My MIL always says Lex looks more like Nate but really everyone else says he's the spitting image of me... I just think he's a cute lil bug.

FYI for all my blogger friends.
I’m not able to explain why I had to hide my blog, but I’ll check on you and if you want access to what’s going on in my pregnancy, you can view our babysite at http://www.babysites.com/sites/jewels/
You can email me at bloggerfriends@yahoo.com
I will deeply miss blogging but find this is the way it has to be due to family matters.
Jewels (empty nesting)