So, this is really going to suck...

Some of you already know and you can just ignore this if you do, but my hubby fractured his wrist in two spots on Friday. He was outside enjoying the nice weather with Andrew, and his nephew (he's 19) stopped by to say hi. Anyway, Andrew kept running over to the neighbor's yard, and DH brought him back for the third time. DH was making a beeline for the front door to take Andrew back inside, and slipped on some ice. We have a huge patch of ice in our front yard and DH's feet went out from under him. He naturally held Andrew up to protect him, but fell down -HARD- on his right hand, which happens to be his dominant hand. :(

Anyway, I get a call at work from my nephew who states he's taking my husband to the ER with a broken wrist. They have Andrew. I find out later that apparently my nephew couldn't figure out how to buckle the carseat so he wasn't even buckled in! My hubby was in too much pain to care, so that pisses me off (luckily, it's not far, but STILL!). DH's nephew is 19 and apparently invincible. He was only listening to my hubby, who was in tears and probably yelling to hurry up and get to the ER.

Anyway, they do x-rays. It is indeed fractured. In two different places. It's shattered on the top of the radius, and there' s a chip of bone off the ulna. It's pretty bad, and they can't just set it. They put it in a semi-hard cast and sling, and stated that the doc who could do the surgery was in surgery for the rest of the day so it'd have to wait until Monday. I called the Director of Nurses at my work (she has 30+ years of medical experience and I knew she'd have some kind of idea) and she said the fact that it looked cloudy on the x-ray was not good--it means that they basically have to reconstruct his wrist. They took a CT scan of it before he left so they'd have that done in preparation for next week's surgery. I told DH that only he would break his wrist on Friday the 13th. He replied, "Is it really? Oh great...."

He (my hubby) is super depressed aboout this. He likes to garden, bike, fish and do projects around the house--all things that require both hands. I am not going to be much help, working full-time, but I told him I'd do whatever I could.

Oh, and how is he, as a stay-at-home dad, going to change diapers? That's the hardest thing. He can pretty much carry Andrew if he has to, but this really means no more trips out. If Andrew takes off running (like he often does), it's going to be hard for him to run after him and get him into his arms quickly and safely. Plus, DH has SAD, which is seasonal affective disorder. He was so looking forward to spring, and now most of it is going to be ruined for him. I just feel so bad, and he wishes he could go back in time.

I am including a pic of the scene of the crime. See, our house faces north, and this part is always shaded by the overhang of the house. It is the last to melt. This snow basically turned to ice from being so old and then getting rained on and re-frozen. The ice is all bumpy. 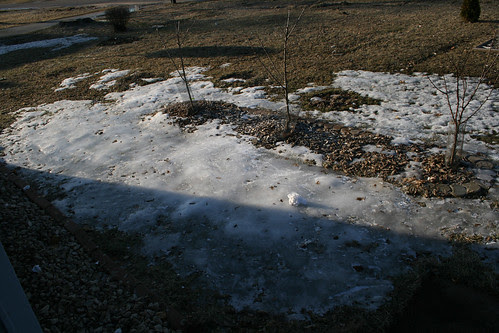 I feel bad for him too, what a crappy time to have such a fall. I hope he can still enjoy the outdoors. Will his arm be totally immobilized? For how long?

We have no idea, but from what I gathered, it'll be a minimum of 6 weeks, but more than likely 3 months. It's a little more of a healing time period because of the surgery, rather than the regular set and cast.

I think it's going to be an elbow to hand cast, so there won't be a whole lot he can do.

PS, we'll know a lot more tomorrow after the orthopedic surgeon gets in there.

oh no! That's a bummer! I know he's miserable! Hope things get better! :)